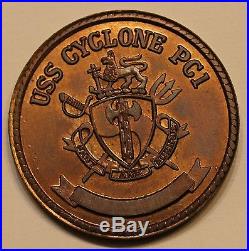 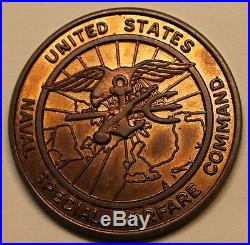 United States Naval Special Warfare Command. Condition: Used, and shows tarnishing from age. This coin is 1 5/8 inches in diameter. It is made of copper. Was the first of the Navy’s Cyclone class coastal patrol ships. As the first of her class, Cyclone served as the test bed for this series of 14 vessels. She was laid down at Bollinger Shipyards, in Lockport, Louisiana, on 22 June 1990, launched on 1 February 1992, and commissioned on 7 August 1993. The primary mission of Cyclone was to serve as a platform for conducting maritime special operations, including interdiction, escort, noncombatant evacuation, reconnaissance, operational deception, intelligence collection, and tactical swimmer operations. Operationally, Cyclone was capable of accelerating from stop to 35 knots (65 km/h) in under three minutes, then move from full ahead to 15 knots (28 km/h) astern in 60 seconds. Originally armed with two Mk38 25 mm chain guns fore and aft, several pintle mounts for attaching. 50 caliber machine guns or Mk19 grenade launchers, and a position for launching Stinger shoulder-fired SAMs, the Cyclone , along with others of her class, were upgraded early on by replacing the after Mk38 mount with the new Mk96 platform. The Mk96 combines both a 25 mm chain gun and a 40 mm grenade launcher on a single stabilized platform. The Mk96 features an electro-optical fire control system with 27x zoom, infrared and low-light modes, a laser rangefinder, and an array of environmental sensors, which feed data into the ballistics computer to produce an accurate firing solution even while maneuvering at high speed. The computer can also interface with the Stinger SAMs carried on board. The Navy was positive about the performance of the Mk96 and briefly considered up-gunning the 25 mm Bushmaster cannon to a 30 mm or even 35 mm cannon, but due to the high price this never came to pass. As good a design as it is, Cyclone had barely gone into service in the mid-1990s when the Special Operations Command rejected them as too big for commando missions, and the regular surface Navy dismissed them as too small for any of its missions. The Navy began looking for ways to phase out Cyclone and her sister ships, so on 28 February 2000, Cyclone was decommissioned and stricken from the Navy list. She was then transferred to the United States Coast Guard the next day, being re-commissioned as the USCGC Cyclone (WPC 1). The Coast Guard lacked an effective vessel sized between its 110′ patrol cutter and the 210′ Medium Endurance Cutter, so there was considerable interest in Cyclone at first. However, her high operating costs were prohibitive and thus she sat largely inactive. She was rechristened BRP Mariano Alvarez (PS-38) , in honor of a revolutionary general in the Philippine war of independence against Spain. NOTE: Never personally given any of the coins. All coins are guaranteed to be in excellent condition unless otherwise specified above. The free listing tool. The item “USS Cyclone PC-1 Coastal Patrol Navy Special Warfare Command Challenge Coin” is in sale since Thursday, October 27, 2011. This item is in the category “Collectibles\Militaria\Current Militaria (2001-Now)\Original Items\Challenge Coins”. The seller is “rolyat11″ and is located in Panama City, Florida. This item can be shipped worldwide.